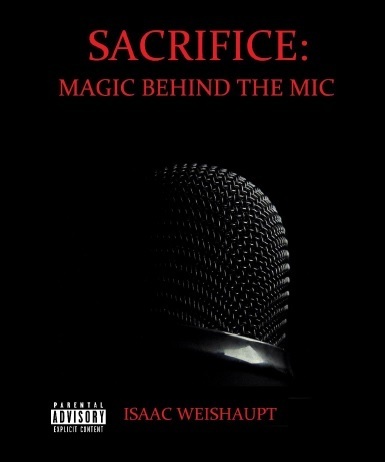 SACRIFICE: MAGIC BEHIND THE MIC

This is literally a one-of-a-kind book. The range of topics I connect and expose aren’t made anywhere else. You can find books about hip hop conspiracies, but you’re not going to find a book that reveals the magical formula of Jay-Z’s power triangle and his obsession with the color blue and why many artists are literally performing magic rituals on their videos.

This is a book written for the hip hop community; by a life long fan of the culture. Even if you don’t know what a ‘Lil Wayne‘ is, you’ll still understand the topics I’m presenting because I’ll take the reader through the history of hip hop, what it means to so many people, how the Illuminati hijacked it, and why there is an occult influence within it that is pervasive to this day.

Take a journey to the dark side of hip hop…

…where the independent researcher, Isaac Weishaupt, lays out the global Illuminati agenda for all to see. In this explicit exposé he’ll explain the origins of hip hop and tell you who the key players are that allow this manipulation to transpire. Examples of powerful occult secrets and magic rituals are presented to the reader, with an explanation of why they’re being subjected to such disorder.

…as you acquire the skills necessary to become aware of the plan the music industry has to instill occultist Aleister Crowley’s ushering of the New Age of Horus.

…for the ancient practice of sacrifice to the blood thirsty pagan gods and selling of one’s soul in exchange for fame and fortune.

The codex for decoding all of the major Illuminati symbols is revealed in the Appendix that provides rich detail of symbols such as the All Seeing Eye, Jay-Z’s power diamond, the black cube of Saturn, and much more.

Learn the REAL truth about:

This is an updated version that includes thoughts on:

• Isaac's experience taking shots on SIRIUS/XM's All Out Show

• SIRIUS: the dog star and the transhuman pursuits of SIRIUS founder Martine Rothblatt

• The agenda of a perfected world

There are also other options available for this book:

**Personally signed copies of the paperback are also available (while supplies last): https://gumroad.com/l/UGyb

See it in your library

View in Library
Sorry, this item is not available in your location.
Sold out, please go back and pick another option.

Your purchase was successful!

We charged your card and sent you a receipt

Thanks for your support! If you have any questions/problems/concerns or just want to provide feedback; you can email me personally at illuminatiwatcher@gmail.com.

Good news! Since you already have a Gumroad account, it's also been added to your library.